Well.. an interesting experience. The fist sign that we weren't in for a pleasant dive was the surfers enjoying the break near the entry point. Never mind; nothing ventured, nothing gained and all that. Michelle and I bailed as the dive wasn't really twins friendly but a few others (Rick, Pete, Tom, Ben Helen) battled on. They found the viz to be less than perfect and the purported driftabsent. The post-dive barbeque had to be relocated to sydney as after frying for an hour (rescued by a local family taking pity on us and offering a spare gazebo), we then found that the previous users of the municpal barbeque had, by trying to feed an extended family of around 2000, used up all the gas! Still, later on, we managed to burn some meat, quaff some wine and generally beat up Ross for a pretty poor dive!

An excellent weekend. The students (Tash, Pete, Helen Matina) worked really hard (harder than the instructors Ross Rick?). We even managed a barbie as well... wonders will never cease. Now all that needs to happen is the students scheduling their diving assessments; over to you guys! 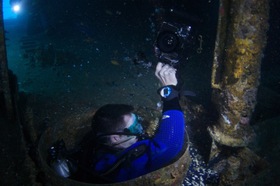 In an attempt to break the world record for the most $$$'s per dive, three fearless adventurers set off to Mooloolaba (about 1 1/2 hours north of Brisbane) to dive the HMAS Brisbane, which was scuttled just off the coast there in July 2005.

We stayed at the Mooloolaba Motel (no expenses spared on the accommodation) and as it was at 10pm on a Friday night, there is only one place to go for a cleansing ale: the classy and conveniently located Wharf Hotel.

Saturday arrived all to early but the weather was perfect. On the first dive, one of the fearless explorers over estimated the clarity of the water took their sunnies for a swim. Most of the first dive was spent swimming around the exterior of the 133m Perth class guided missile destroyer.

After an hour for tea cake, the second dive as a drop down the forward funnel, round the engine room, up the rear port side fire exit (bit of a squeeze!). The 36% nitrox was probably a bit of an over kill, as with all the excursion it was har... 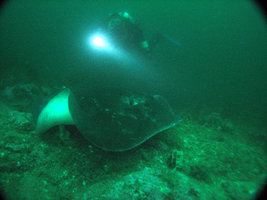 Three great dives on some of the best sites Shellharbour has to offer. 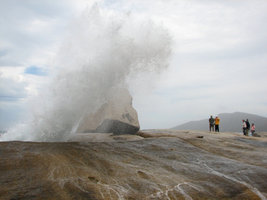 Over Christmas some of the more foolhardy members of the club went off to explore Tasmania. While it wasnt exactly a club trip and it wasnt all diving here are some of the underwater highlights... the advance party (Matina, Ross, Rick and Ben) established base camp in Bicheno, a charming village on East Coast. We were booked in for two days diving with the Bicheno Dive Centre on the first morning it was a bit blowy so on the advice Bruce, we went off rock-hopping up the local gorge rather bob around in the washing-machine like swell hoped for better weather the next day. One member of the party still managed to get wet, if only knee deep, after slipping off one of the rocks. Unfortunately the next day the diving conditions were still grim so we drove up the coast to the Bay of Fires, but Peter, the proprietor of the local dive shop said the vis was down to arms length, so not really worth getting wet for. The following day we were heading up to the Promised Land (near Cradle Mountai...