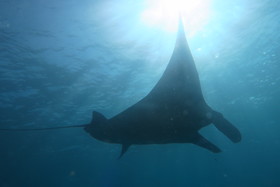 Bags were packed and we were off to Brisbane for the Australia Day Straddie trip with our friends from Brisbane BSAC.

Andy, Ben, Duncan and Fe were part of the early wave heading over Thursday. After a whirl wind trip to Dan Murphys and Woolies for the must haves, beer, wine, gin and tonic, it was off to the ferry.

Friday we were up bright and early as we were on the first wave and so glad we did. The mantas were out playing and the sharks were everywhere.

Friday afternoon we were joined by Mon and Soo and some very nice gin thanks to Andy. We also had a trip to the gelato shop which I believe is a bit of a Straddie tradition. As it was Australia Day a BBQ was on the menu.

We got a bit of a sleep in Saturday morning as we were on the second wave. Still plenty of sharks, a manta and a couple of octopi chasing each other around. Another lazy afternoon with safety gins.

Sunday morning had Ben, Duncan and Mon up and diving while the others headed to Brown Lake to get so...

A dive at Bare Island was the first of two ‘the Meakin is back’ dives planned for Gary Meakin’s return visit to Australia. After organising equipment and logistics the time was set for an 8am meet at La Perouse on Saturday.

At 7:30am Monique and Sam received a message from Gary informing them that he had split his head in a surfing accident that morning and was going to hospital for stitches! This followed the news that a swimmer had been very badly bitten by a shark at Congwong beach the previous evening. The first we learned of this was when 9 News approached Sam for an impromptu interview. This later appeared on the evening news when the ‘local swimmer’ declared how ‘totally shocked’ he was. 9 News failed to include the bit where, when asked if the shark attack had deterred him from entering the water, Sam replied ‘no, but my wife won’t be very happy with me if she sees this on the news’.

During the final stages of kitting-up a policeman approached the groups of divers and...

In the second of the two Meakin dives (see the Bare Island trip report for the first one) the famed former member did make it to the dive site this time. The Sydneysiders arrived between 7:45 and 8:10am and even then you had to go a fair way up the road to get a park...I guess it was the warm sunny weather and flat calm seas that got everyone out of bed so early on a Sunday morning. We'll have to go for 7:30am start next time. Having established base camp near one of the BBQ, we waited for the stragglers.

With a quorum of dives we set off. Marie and Ben hitching a ride to the far end of the reef with Andy and Al who had brought the scooters down. There was good viz on the ocean side, max. depth around 12m, with most people managing the planned 1 hr runtime. Once the formalities of the morning were out of the way it was time for brunch. There was a fine amount of bacon, HP, tommy K, tabasco, eggs, but al...

The days were getting colder so it was time to pull out the Santa hats and pretend it's Christmas. Houses were booked, shopping was done and it was time to head to Dumplings Den in Mudgee for a weekend of festivities.

Friday nights fun slowly grew as people arrived. Andy showed off his sharing skills by supplying the cheese and wine while Soo sorted out the pizza.

Saturday was a free day with people doing what they wanted. The two popular choices were the wine tour and the Field Day (the highlight of the Mudgee social calendar - a fine collections of baby farm animals to be petted, sheepdog trials to be watched, a magnificent collection of farm machinery old & new as well as more wine tasting and great slow cooked lamb sandwiches!). Judging by the excitement when everyone arrived home they were both a big hit.

The main event kicked off with G&Ts around the fire followed by champagne and wine. The food started and didn't stop. Prawns, cold cuts, tinny bum chickens, ham... 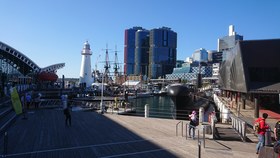 Six fearless members of the club took technical diving to new limits - exploring the shipwrecks of Titanic and German battleship Bismarck as warm up dives before setting down on the bottom of Challenger Deep, the deepest-known point on Earth. All this was conducted from the safety of the Australian Maritime Museum, without getting wet, no kit faffing nor cancellations due to weather and either side a picnic accompanied by a cheeky glass of wine! We also managed to squeeze in a tour of a submarine and take in the Wildlife Photographer of the Year photos with some club members even pledging to dust off their cameras in the near future. I look forward to seeing underwater photos taken by SSAC as winners next year :) 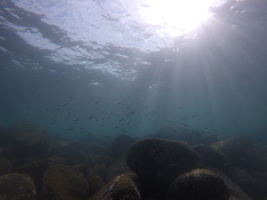 As forecast, there was barely a breath of wind on Saturday morning and there was still a light fog lingering over Shelly Beach as we kitted up. Alas, the swell hadn't dropped as much as we hoped so there was enough of a break over the reef there a couple of optimistic surfers paddled out, and encouraged me to go and explore the rocky foreshore on the left-hand side of the bay. What a revelation that was! I don't know how many times I have been to Shelly, but I've never been down that side...there were more Wobbies than you could shake one of the Port Jackson at, shoals of fish large and small, Blue Grouper rays. It was a fabulous dive! Max depth 5m, which was about the limits of the visibility. Water temperature was 17'C, chilly enough in a 5mm wetsuit to not want to hang around more than 45 min.

The post dive coffee and egg 'n bacon roll watching the world go by capped off an excellent morning. Giving there were a group of paraplegics off for a dive, what excuses do t...